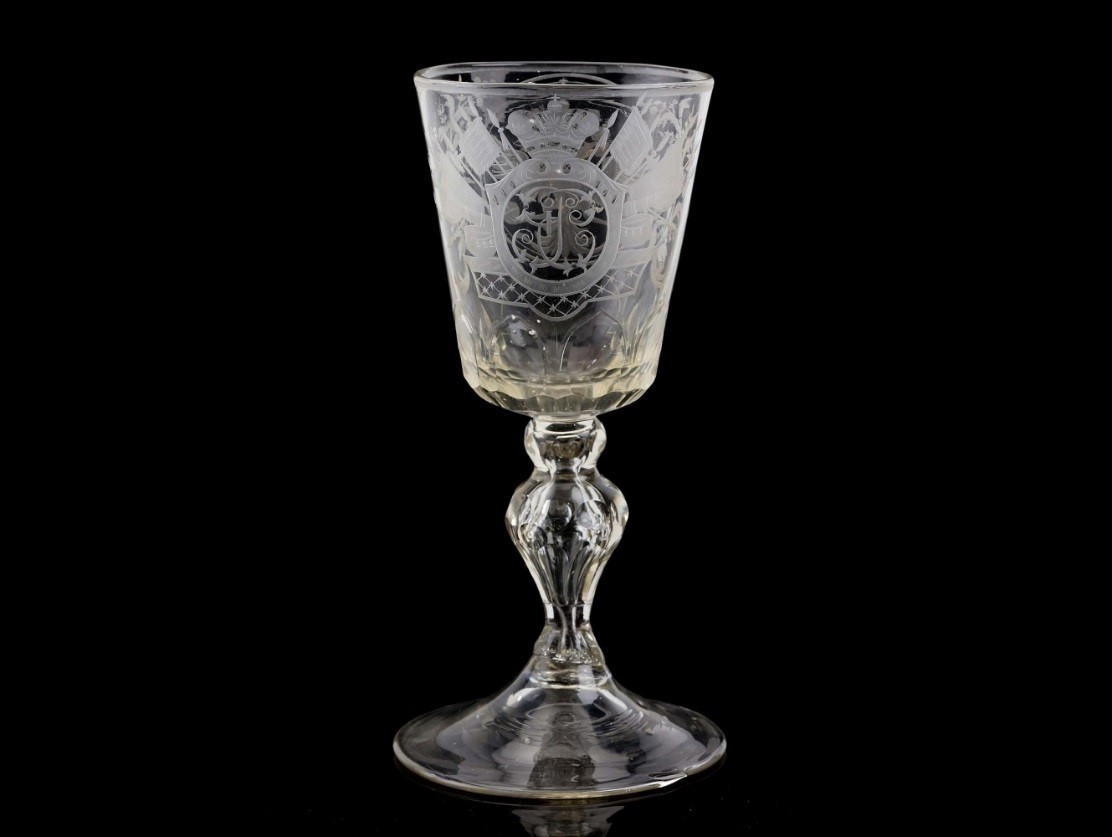 Our best seller was a Russian engraved royal goblet from the 1750s which is likely to have been made by the Imperial Glassworks in St. Petersburg.

Bought for £5,280, including buyer’s premium, the piece is of an unusually large size at 27.5cm high.

It has a faceted base and is decorated on one side with the cypher monogram 'EP I' for Empress Elizabeth Petrovna I (Elizabeth of Russia), beneath a coronet.

Not far behind in sale price, a fine Soviet Russian porcelain plate fired by the Imperial Porcelain Manufactory in St Petersburg sold for an impressive £4,800 including buyer's premium. 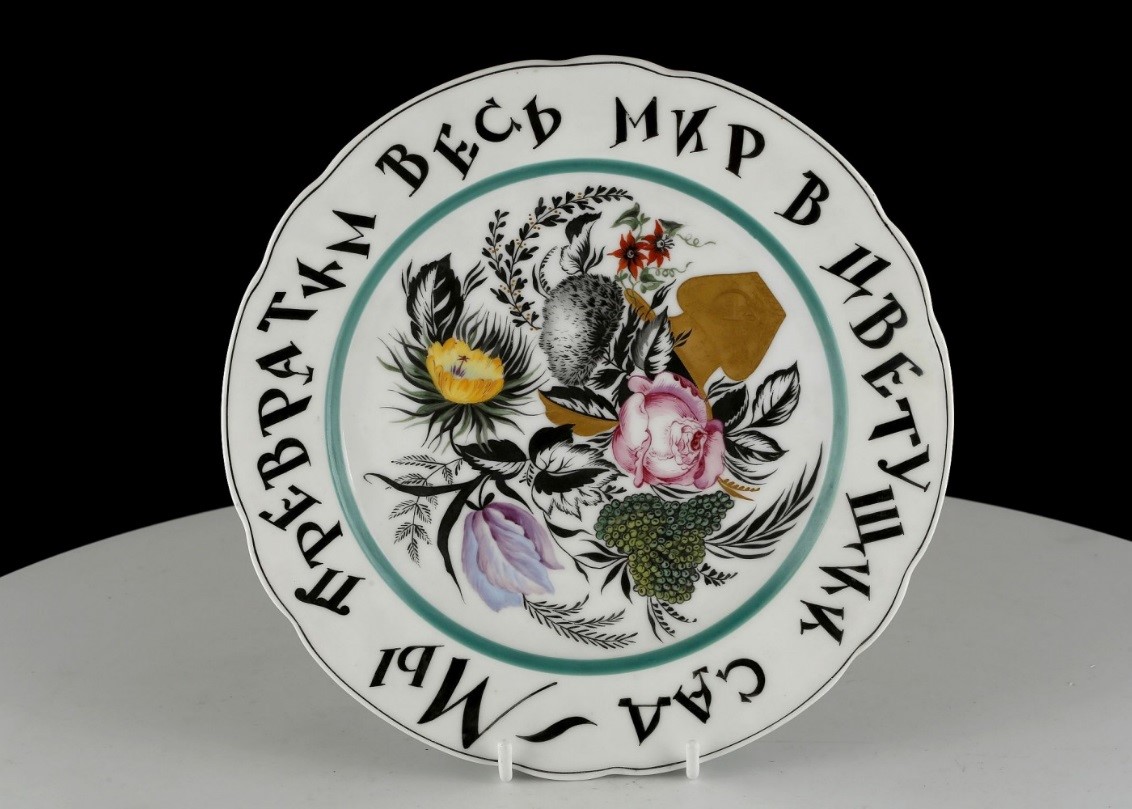 Dated 1921 and printed with the Imperial cypher for Alexander III in green, it was later overglazed by the Soviet Porcelain Manufactory with a design of a blue State Porcelain mark of the hammer, sickle and cog, and the date 1923 by Sergei Vasil'evich Chekhonin (1878-1936). Sergei Chekhinin was a Russian graphic artist and ceramicist, best known for producing propaganda porcelain. He served as artistic director of the State Porcelain Manufactory in Leningrad from 1918- 1923, and again from 1925-1927.

The centre is finely painted with a tooled gold vase containing a large bouquet of stylised flowers, with foliage picked out in black, with a bluegreen border. The rim is inscribed in Cyrillic with the phrase 'Мы превратим весь мир в цветущик сад' – ‘All Will Become Peaceful and Flourishing’.

This engraved royal goblet, circa 1770-90, likely to be by the Imperial Glassworks in St. Petersburg, sold for £3,600, including buyer’s premium. It is decorated with the double-headed Imperial eagle surmounted by a coronet and flanked by palm fronds. It bears the cypher monogram 'EA II' for Empress Catherine II of Russia (Yekaterina II Alekseyevna or Yekaterina II Velikaya), set on a multiplespiral opaque twist knopped and faceted stem incorporating 11 opaque white spiralling threads, over a conical foot.

Catherine II of Russia (1729-1796), also known as Catherine the Great, was the longest ruling and one of the most influential female leaders of Russia. Her reign (1762-1796) is known as Russia's 'Golden Age'. 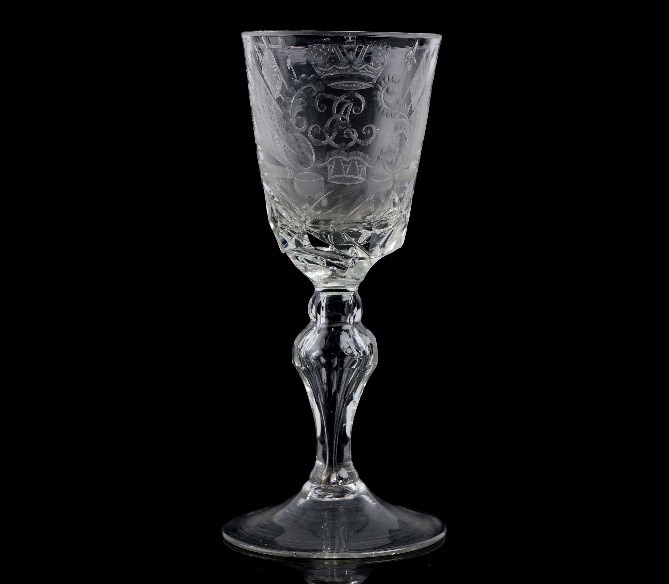 Catherine I of Russia royal goblet

This fine and rare Russian engraved royal goblet from circa 1725 sold for £3,600, including buyer’s premium. The round funnel bowl with solid teared cut and faceted base is decorated with the crowned cypher monogram 'EA' for Catherine I of Russia (Yekaterina I Alekseyevna) and flanked by martial trophies. It’s set on a hollow faceted inverted baluster stem and a conical foot and stands at 20.2cm high.

Catherine I of Russia (1684-1727) was the second wife of Peter the Great and Empress of Russia from 1725 until her death in 1727. Due to her short reign, it is very rare to find glasses such as this bearing her cypher.

Also performing very successfully were: a heavy Baluster wine glass, circa 1715 sold at £2,800, a pair of 19th Century Meiji Japanese square shaped bronze vases, both decorated with flora and fauna in the landscape sold at £2,760, a fine Meissen teapot and cover late 18th century, of typical bullet form and decorated with a landscape scene depicting figures and ships sold for £2,400, a School of C. Kuwasseg oil on canvas painting of a Dutch river town scene sold for £2,160. All prices include buyer's premium. 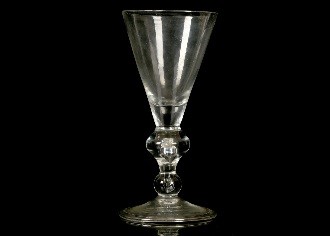 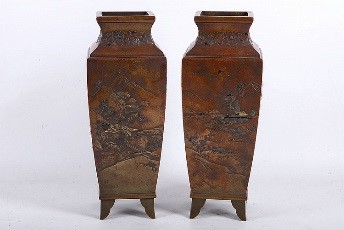 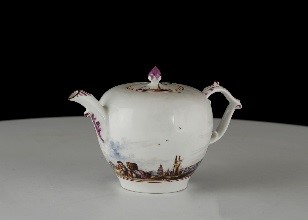 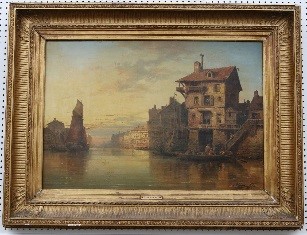