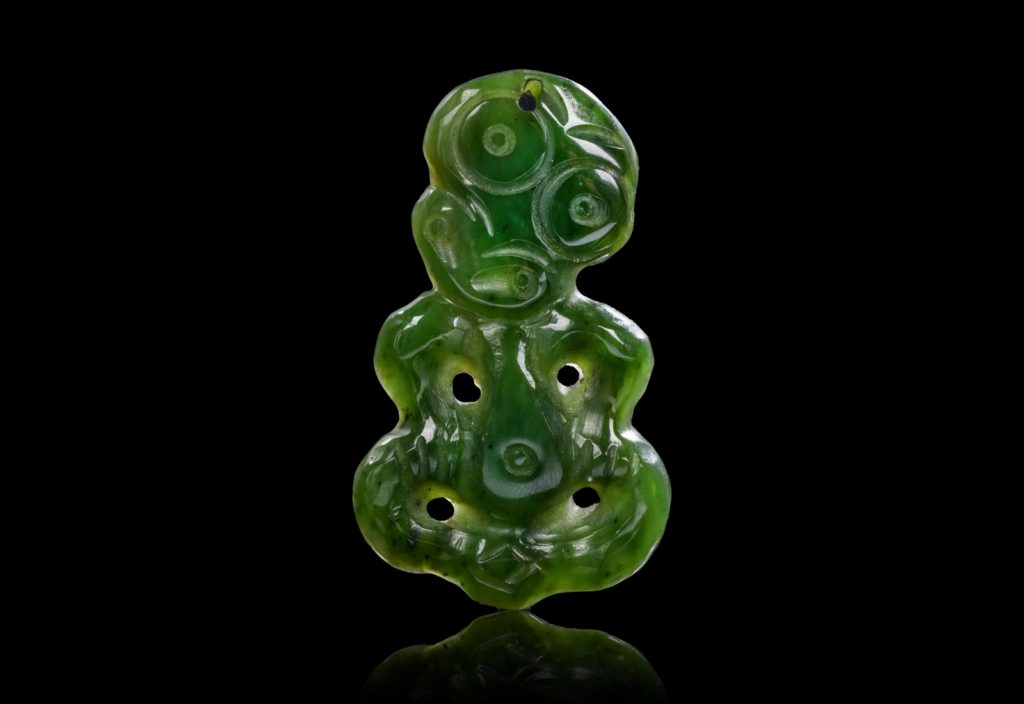 Maori Anthropomorphic Pendant. Delicately carved in hardstone, probably nephrite, this hei tiki has the head turning to the right and arms resting on the hips, the wide eyes, open mouth, fingers and naval are all finely depicted, it is pierced through the top of the head for suspension, 5.9cm. Estimate: £600 - £800.

Ahead of the Tribal Art & Antiquities auction on 5 December, Specialist Alice King takes a look at two Maori tools offered in the forthcoming auction that exemplify both the ornamental and the practical use of this material.

Some of the most interesting and desirable tribal pieces from Oceania are Maori tools and pendants from New Zealand, made from a hardstone known as Pounamu, distinctive for its lustrous green patina. Pounamu is the Maori name for all types of hardstone with a greenish hue, including jade nephrite and serpentine; it has a long history in the Maori culture as a material used for both ceremonial and practical objects such as fish hooks, hand clubs, pendants and pins.  The first is an anthropomorphic pendant known as a hei tiki.

'This example takes the typical form for pendants of this kind, the head turns to the right and arms rest on the hips, the wide eyes, open mouth, fingers and naval are all finely depicted, it is pierced through the top of the head for suspension so that it can be worn around the neck.' - Alice King

Hei tiki amulets have been made to be worn throughout Maori history and there are several theories as to their significance, some suggest they represent ancestors and others that they are manifestations of a fertility goddess.

A Maori Pounamu Mere. Probably nephrite, traditional weapon of the Maori in New Zealand, was used in close combat and as a symbol of chieftainship, 26cm. Estimate: £1,000 - £1,500.

In addition, a traditional Maori hand club known as a mere will also be offered. The broad leaf shaped face narrows to terminate in a butt incised with five grooves on each side with a small hole through which a fiber loop would have been threaded for attachment.

'Used as a weapon in close combat for striking the head or chest, mere also have a strong ceremonial significance as symbols of chieftainship and were often passed down from generation to generation and carefully guarded.' - Alice King

Both these objects are fine examples portraying not only the characteristic dark green colour but also the delicate carving associated with Maori pieces made of pounamu.